After reading her birth story and seeing her request for others, I decided to participate.

I never posted this, and got a little nostalgic, so I thought I would. It’s quite detailed and not for the faint at heart!

I went to work on Thursday 10-12, but left early in the afternoon. I knew the
contractions were more than Braxton-Hicks. I came home and slept for a bit and tried to eat. I called Mr. Serious, and he wanted to time them. I started to lose my mucus plug at about 5:00pm. He got home about 6:30pm and we went for a walk and started timing them. The contractions were 1.5-2 minutes apart and lasted anywhere from 30-45 seconds. Hubby was freaking out a bit, and called the midwife. They said come on in.

We got to the hospital and they admitted me around 8:30pm. They hooked me up to the monitor and started measuring and the contractions were consistent. They came and checked me and I was a dimple!!! What, what are all these contractions doing? They told me to drink lots of fluids, got an IV and started walking around. They wanted to see if it was false labor or not. The contractions continued in intensity, and we walked around and drank a ton. Still at about 1am, I was just a dimple! At this point they gave me a sleeping pill and told me I would wake up at about 3 in active labor.

Well, woke up before then, and still nothing. The midwife came in later that morning, and “made me 1cm” (yeah, thanks for telling me it is going to hurt like crazy, and that you are even going to do it!). Still nothing after that, just a lot of contractions and bloody show.

Cut to new midwife some time in the afternoon. She decides this is too long and we need to start doing something. At about 1:30pm, I get an epidural, followed by pitocin and breaking my water. #1 had decided to poo in me, so I had to have fluids going into my uterus to flush things out.

Apparently, I have a finicky uterus because they were constantly tuning the pitocin so my contractions would be most productive and easily spaced.

Finally, at 11pm on Friday, 10-13, I was ready to push. After pushing for almost an hour, the midwife decided that the dreaded episiotomy was in order. At 12:29am on the 14th (just 30 minutes after her due date had passed), #1 finally made her appearance! Mr. Serious screamed out “It’s a girl” as we had decided to be surprised by her sex.

Unfortunately, because of the meconium, I didn’t get to hold her immediately like I wanted. They had to clean her up and suction her before I really got to see her. Because of the previous flushing, though, she didn’t have any meconium in her lungs, so I was extremely grateful. I did snap some pictures from the bed while they were waiting for the placenta to come out. 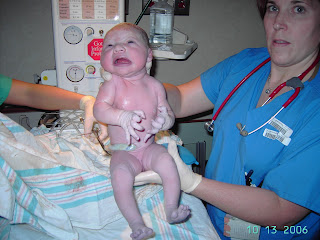 I finally got to hold my little girl. 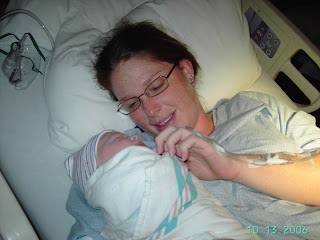 Our happy family of three (me sooo bloated from the IVs for a day and a half.) 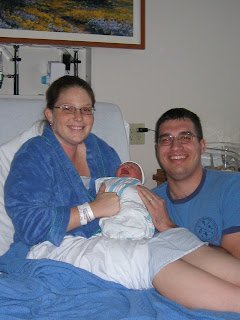 Thanks for reading…sorry so long (you’re going to have a long story with 28 hours of labor!!!)