You are here: Home / family / In need of some Christmas cheer

I’m having a hard time getting into the Christmas spirit. I’m not sure what it is…it’s not that I don’t like giving gifts or getting them. It’s not even that I don’t like decorating. The only thing I can think is the idea of traveling around the holidays with a 14-month old (and very independent at that) and the hustle and bustle of visiting family and going, going, going.

So, I thought I would remind myself of what I am thankful for. All ready to meet Santa last year. 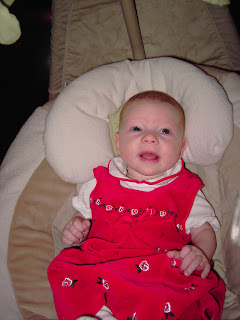 I thought I would tell a funny story from last year!

Mr. Serious, #1, my mother-in-law and myself were set on walking to visit Santa. It was a pretty warm December day. It was less than a mile to this little cabin where community members volunteered to be Santa and take pictures with the kiddos. We planned to get there a little before they opened so we didn’t have to wait too long with a 2 month old. I should now mention that #1 hadn’t poo’d in a couple days (which is totally normal for a breastfeed baby, but usually leads to a “butt-splosion!”). As we were waiting for Santa to get all set up, we looked down at our beautiful daughter in the stroller and we could immediately tell she was taking care of business. As we got to the front of the line, I went to pull her out of the carseat in the stroller. I immediately noticed some brown seedy looking stuff. I thought maybe somebody had eaten some chocolate while holding her. Then I noticed it was ALL over the place. All over her little tights, up her front and back….EVERYWHERE!!!! We realized it was poo! YUCK. Then we noticed we were at the front of the line.

We wrapped a blanket around her, and told Santa her diaper sprung a leak, but she is all covered. He assumed she was just wet! We got some good Santa pictures, then proceeded to a find a table in the back room that doubled as a changing table. Thankfully, I was prepared with a change of clothes and a bag to dispose of the diaper and take the clothes home for the soaking in the bowl that we had become so accustomed to. 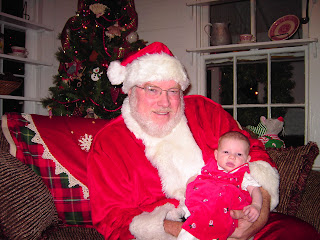 We then headed off to dinner and enjoyed ourself.

Just a funny Christmas story to embarrass my daughter at a later date! Now this year, I’m sure she’ll be mortified of Santa and we’ll get a picture of her screaming.