You know that thing about saying something and the opposite happens? Or maybe it’s speaking something so it happens? Earlier this week I was lamenting that we didn’t have anything planned for Spring Break. So, naturally, the week before and first weekend of Spring Break all of the things come up! I think this might be the most pictures I’ve taken in a week, too!

Mr. Serious was out of town at a work conference, so I was doing the solo parenting thing. Thankfully, I don’t have to do this very often. The last day, we decided we couldn’t stand the filth of his van. (Sidebar is that I was driving his van because mine had to go to the shop…why not keep it extra crazy?) So, that evening, we filled up the tank, did a drive through carwash and vacuumed out all of the stuff.

The girls thought it was a blast! They are also pretty good with the free-after-wash vacuums.

Later in the week, it was time for B’s Easter egg hunt at preschool. I signed up to “hide” the eggs first. It helped me get in quite a few steps and the kids were done in about 0.5 seconds!

We had such a jam-packed Saturday that we even had the kids not attend their optional sparring class on Saturday. We made it to our neighborhood Easter egg hunt. Of course the kids made out like bandits. Maybe they’ll share some with me?

Mr. Serious was sent a new Go Anywhere Quick Dry Hoodie from Tommy John that is focused on versatility, function, and importantly comfort. He put it on and commented on how nice it feels. He says it’s very comfortable and he’s happy that the sleeves fit his long arms (which is usually a challenge). For reference, he’s 6’3” and is wearing an XL. I also liked how it looked on him, which of course is a big plus. I’m not as big of a fan of the hoodie, but it could be practical for a cool morning or evening run. The fabric is moisture wicking, extremely fast drying, and anti-odor, yet still remains reassuringly bulk-free, soft, and perfect for layering. He wore the shirt comfortably for the rest of the day!

Tommy John also has some great Boxer Briefs for day-to-day as well as working out. Not to worry, we won’t share a picture of those!

Between the hunt and our next adventure, we needed some lunch! We have to fuel the adventures. I was sent a Sonic gift card (as well as a Donor’s Choose gift card) so it was the perfect time to head to Sonic to grab some food, limeades and share a little more about their Limeades for Learning promotion.

SONIC Drive-In’s annual Limeades for Learning campaign is a philanthropic initiative that donates $3 million per year in support of public school teachers all over the country. For the next few months SONIC will be donating money to teacher projects posted on the Limeades for Learning website. Teachers from coast to coast can get the school supplies and materials that they desperately need for their students and classrooms.

It is no secret that every year public school teachers are spending hundreds of their own dollars to buy supplies they need for their classrooms. SONIC saw this need and created Limeades for Learning as a way to help offset some of the teachers costs by providing funding for the supplies they need. The program is successful with the help of DonorsChoose.org, an organization dedicated to making it easy for anyone to help a classroom in need. To date, SONIC has donated more than $7.5 million to public school teachers, funding more than 14,000 classroom projects and supporting more than 419,370 students.

We can drink a limeade (or two) to that!

Donating through DonorsChoose.org is so easy. And, it feels great! When the project is funded and the classroom purchases what they need, donors are sent handwritten thank you cards from the students. It’s the most heartwarming and humbling experience. Head to limeadesforlearning.com to look at the projects available. You can even search for a classroom close to you. 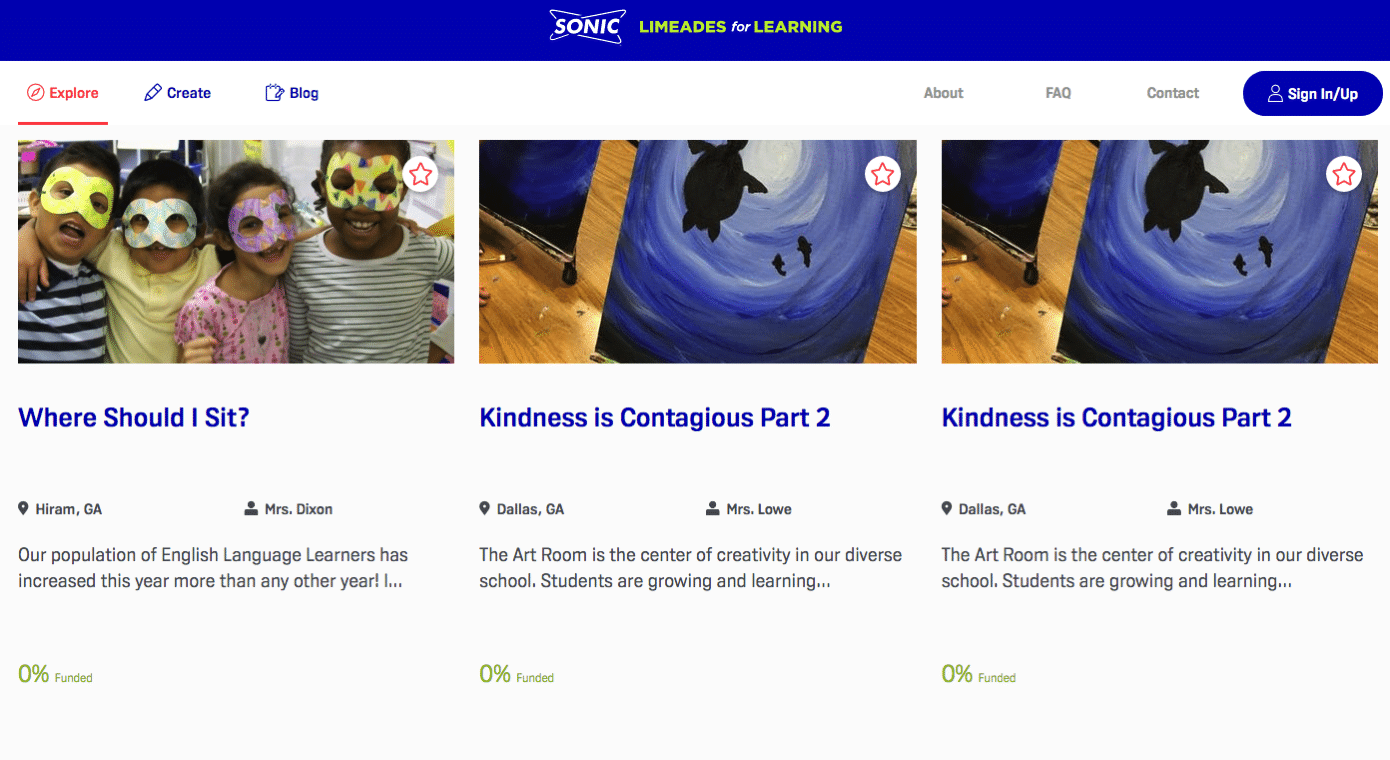 See below and enter to win a $50 Sonic Drive-In Gift card and and $200 Donor’s Choose gift card to fund a classroom project that speaks to you.

Our day didn’t end there! We were only warming up. After filling our bellies, we headed to Fernbank Science Museum (which is tied to one of our local school counties) to experience One Strange Rock Space Projection Helmet and to see the first episode in the planetarium. B needed a little help with her helmet…and I was okay with that because I was worried the helmet might be a little much for me.

After 4 minutes with the helmets, it was time for a quick picture. Hey, they said to do poses….and when told to do poses, we do poses!

Then it was off to the planetarium, to watch the first episode of One Strange Rock. It was pretty cool and I learned so much about things on the Earth that I had no idea existed. It had me looking to see if we even had the National Geographic Channel and trying to figure out if we could watch episode 2! (If you have it, check it out, and Will Smith narrates!)

Saturday Afternoon: A Picnic and A Braves Game

Still not done! After the museum, we made a trip home, cooked up some chicken for chicken salad and packed up some dinners for a picnic at the Battery. It was a great day for eating outside and everybody was pretty much all smiles. Then it was time to hit the ballpark and watch our Braves beat the Phillies.

Of course there were ballpark snacks…who can resist cotton candy, but, confession, we didn’t make it through the whole game after that day. We still weren’t even home until after 10pm!

Somehow, we made it to church in time for breakfast (not early enough…the bacon was all gone!) and sat waiting for the service to start for 20 minutes. It was unheard of for us!

It’s now Sunday evening and we have a full week of Spring Break ahead of us! I think we are all exhausted from this weekend and the pollen. So there just might be some rest and relaxation this week, too!

What did you do this week?