You are here: Home / wordful wednesday / My sweet sick baby (and I question everything) | WW

Having a sick baby is pretty much one of the worst feelings a mom can have. It’s especially tough when you can’t do a lot for them except try to make them comfortable. And sometimes, that’s hard.

Tuesday, E seemed warm to me. Actually she was hot. She had wanted to be held and cuddled all morning. I finally took her temperature, and she was at 100.4F. This seems to be a magic cut-off for the pediatrician.

I called. They told me to keep an eye on it and give her some pain/fever reducer. There should really be something that helps with the pain (she seemed miserable), but doesn’t do anything to the fever. Fevers are good (within reason). She got up to 101.2F via ear thermometer. She was burning up, so I caved and gave her some medicine. About 45 minutes later, she smiled for the first time that day. 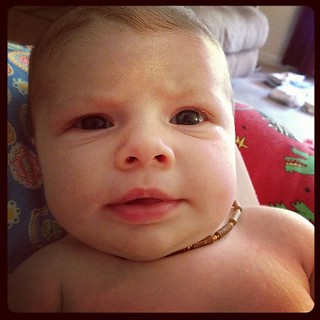 (Right after I took her temperature and got 101.2F)

She still had a fever Wednesday, so I called to take her in. She screamed when I touched her ears, so I thought it was an ear infection. I just wanted it confirmed.

Apparently, modern medicine then goes into hyper overdrive and must rule out anything and everything when a baby this young has a fever.

(I wish we would have just stayed home.)

They tell me they want a urine sample (yep, a catheter), a blood test via CBC (poking her in the heel and squeezing) and a chest x-ray (in a torture device that they say “looks like a torture device but doesn’t hurt them). I really questioned the doctor. And, I’m pissed. I’m pissed because she made me feel like a bad mom for questioning her. She made me feel like I was a terrible mother if I waited to see if her fever broke on her own and waited one more day. “I’ve seen things go wrong in one day.”

(By the way, I refused the “non-torture” torture device and held her for her x-rays.)

All of the tests were done, and four hours later, we were home. She pretty much went straight to sleep. 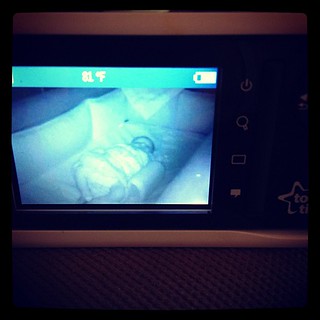 (Notice it says 81F in her room. Our house has one AC unit and it’s thermostat is downstairs. Stupid. So I had to crank it down really low and her room cooled off finally!)

About two hours after that, we got a call that the blood and urine look good, but her x-rays show bronchiolitis. But her lungs sound good, so we are just keeping her hydrated and watching the fever.

I’m wishing I wouldn’t have looked for a link…asthma and RSV are both mentioned. Scary.

But, I’m still questioning the doctor’s office. And, I still want to find a doctor that works with me. Even if this was the right treatment/ tests to run, I don’t want to feel like a turd because I question the necessity of the tests.

(We are still keeping an eye on the fever and congestion and watching her closely. I’m confident there won’t be any steroid breathing treatments required, but as always, prayers for a speedy recovery are definitely appreciated.)

I’m linking up here.  Go and visit their Wordful and Wordless Wednesdays.