You are here: Home / family / The Story of N’s Birth

What an eventful week leading up to her birth.

You can read the progression of the “induction” that wasn’t to be here, then here and finally here.

Friday (10/10) night, while at our friends’ house, after all of the drama, I started losing my mucous plug and having contractions. So, I sat down, put my feet up and drank tons of water. The contractions went away. I kept losing more “plug” all weekend.

Saturday (10/11), Mr. Serious and David stayed with the kids and watched football while Marty and I went double stroller shopping and made a trip to Ikea. There was a lot of walking involved.

Sunday (10/12), I was dreading going to church. We had told many people about the impending induction, so I knew they were going to be surprised to see us. Everybody asked how much longer, said we looked ready, and everything else. I asked Mr. Serious to field all baby related questions. I was D-O-N-E!

I went upstairs and took a long bath. I even lit some candles for myself and just relaxed. Then, I came downstairs to sit with Mr. Serious. I was still in just my towel after my bath (I was so hot and uncomfortable in clothes at this point). I was downstairs for about and hour.

I got up and went to the kitchen for something…I’m not sure what, and I felt a trickle run down my leg. I thought I was peeing on myself, but then, it wouldn’t stop. There I was at 9:30pm standing in my kitchen over a puddle of amniotic fluid. My lovely hubby cleaned it up for me.

We then called the doctor’s office to see what to do. I wasn’t having contractions, just the water breaking to indicate I was in labor. The water kept leaking and leaking every time I moved.

Starting at 9:41pm, I started to have contractions that were around 3-7 minutes apart. At 10:00, the nurse called and said I should head to the hospital because I had tested positive for Strep B and needed to make sure I got all of the necessary antibiotics.

We didn’t want to rush in. My platelets at the last test were only 91,000 and I knew if they were still low, I couldn’t get an epidural. And, I also knew that I was likely going to have to have pitocin because my body doesn’t make progress with my contractions. We were both a little nervous about this combination.

So, we took our time, got all of our bags and everything in the car, woke #1 up and drove her over to the Montes’.

During this time, my contractions weren’t really regular, but I knew they were coming.

We arrived at the hospital at 11:30pm where the nurses proceeded to ask me if I was being induced because I didn’t look like I was in labor.

At 11:49pm we were in a room and ready to be hooked up to the monitor. We answered the myriad of questions and filled out several forms (while having more regular contractions).

Monday (10/13) morning, at 1:00am, my IV was started with antibiotics and fluids. They also drew lab work to check my platelets. They checked me and I wasn’t dilated at all. The nurse even ordered an ultrasound to make sure #2 was head down (because she said she couldn’t feel it). This was extra surprising because all of the midwives and doctors for the passed two weeks said I was dilated to 1 cm and they could feel her head.

Contractions continue, but they still aren’t regular. I would get into a pattern, and then they would stop, or shorten, or lengthen. Good news, my platelets were 111,000 so we could get an epidural. We had to move quickly or the anesthesiologist would want to check them again.

The midwife says we should start pitocin.

At 3:45am, the ultrasound is performed and #2 is in fact head down. Nurse Jenny wanted to start the pitocin and I asked very strongly that I get the epidural first. She says she’ll start the pitocin slowly, and I ask again. She says okay (reluctantly) because I’m having regular contractions (whew…that was a close one…Mr. Serious was very proud of me)!

At 4:15am, I get my epidural. It was perfect. I didn’t go completely numb. My legs were just heavy and tingly, but I could still move them.

At 4:19am, the pitocin was started and continued to be fine tuned for perfect contractions.

I tried to nap…Mr. Serious was out. At 6:30 nurse Jenny came and checked my progress and I was 3cm. I thought, that’s pretty good, maybe we’ll have a baby by dinner time.

Mr. Serious woke up around 7:30 am and we both brushed our teeth. He headed out to grab some breakfast. Then he came back because he forgot his wallet.

Then, he was off again. Around this time, I really started feeling pressure. I told the new nurse, Lanese, and she checked me. Sure enough , I was completely dilated at 7:55am. I was shocked. I called Mr. Serious and told him he needed to get his breakfast to go.

He came back to the room and they were getting it all set up for me to push. The midwife came in, told me to do a practice push and then said to stop. “We’re going to have a baby very soon.”

It was so fast we didn’t even think to get the camera out. I started pushing at 8:10am. There were three rounds of contractions (during one of which I had to stop because she had her hand up in front of her head) and six minutes later at 8:16am, #2 Grace arrived.

It certainly was a very different birth than #1 and so much easier and faster. We couldn’t believe how fast she came.

Welcome to the world sweet #2! 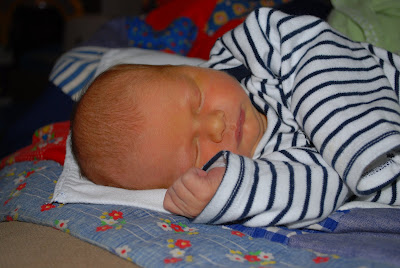