You are here: Home / travel / 10+ Incredible Reasons to Take a Helicopter Tour of the Grand Canyon with VIDEO

Mr. Serious and I recently took a trip to Las Vegas. It had been over 12 years since our last trip and we wanted to do more fun and not gamble. Crazy, right? Keep reading to see our 10+ incredible reasons to take a helicopter tour of the Grand Canyon and the Hoover Dam.  (And yes, we paid for this tour on our own!) 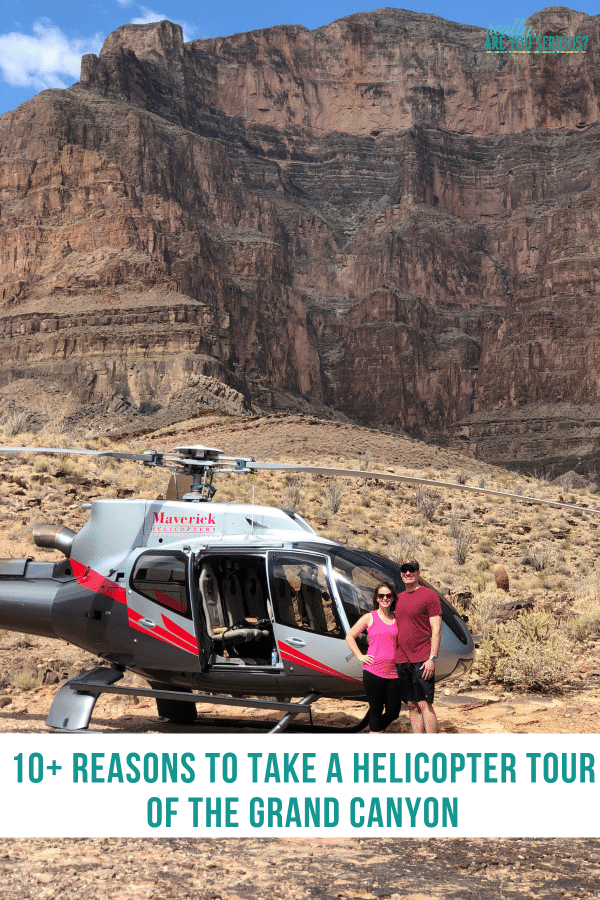 Then I started telling people and they looked at my like I was crazy. They told me how there’s nothing to do or see on the way and it’s a hot, dry desert. Not one person thought it was a good idea. Every single person (not hyperbole. not exaggeration) said that a helicopter tour was the way to go.

This motion sick, claustrophobic, type-a controlling personality thought that was a terrible idea. All of the “nopes” were said. But I kept hearing how amazing it was and how it was worth it. People that I thought “never in their lives would they get in a helicopter” told me it was the “must see” way to see the Grand Canyon. So, I decided to start looking around, pricing it out, and we booked our first helicopter tour to the Grand Canyon and Hoover Dam through Maverick helicopter tours.

Let’s just get this out of the way. EVERY SINGLE PERSON WAS RIGHT! A helicopter tour of the Grand Canyon and Hoover Dam was the best way to see them, ever. (I have no comparison, but I’m putting my non-gambled money on that!)

A panoramic picture taken inside the Grand Canyon.

1. It’s one of the seven natural wonders of the world

I’ve never seen one of the natural wonders of the world. Being so close to one and having the means to get there, we made sure to make it work.

A view as we flew down into the Grand Canyon to land.

2. You fly over and INTO the Grand Canyon

The view inside Grand Canyon during one of our landing stops.

Since you are in a much faster mode of transportation, you will see a lot more of the Canyon than you could by car.

You truly can’t see the Grand Canyon or the Hoover Dam from above any other way. 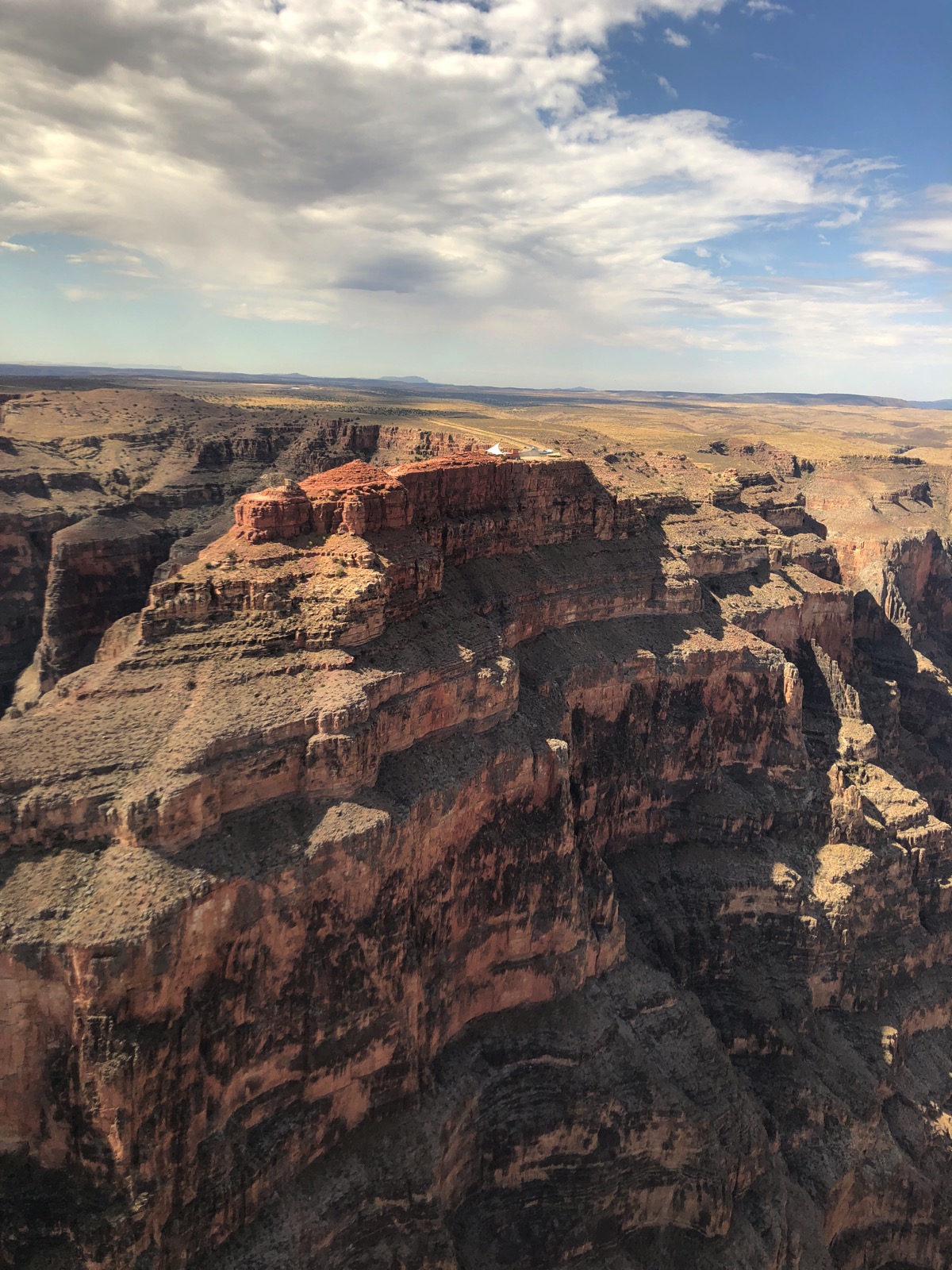 The view from inside the helicopter while flying over the Grand Canyon.

3. The views are amazing

I think this is really a sub heading of all of the other ones, but it really is a reason to do a helicopter tour. When I shared pictures on social media, I captioned my picture “There aren’t words to describe how beautiful and amazing the Grand Canyon is. (See, I tried and fell short). And to stand inside of it…wow. I was super reluctant, but a helicopter tour is definitely the way to see it. And yes, it’s as hot as you think it is.”

It really is so much more stunning in person. The picture alone is gorgeous, but words really can’t describe it.

It’s nothing fancy, but there’s something about toasting with champagne in a plastic glass inside the Grand Canyon! I don’t think that’s something I ever thought I would say. They also make sure to bring a cooler full of non-alcoholic beverages, too.

You will end up drinking two full bottles of water while you are there for your 30 minute stop. Did I mention it is hot? (We did go in July, but I’m not sure how much more it cools down during the winter.)

5. The quiet and sereneness of the Grand Canyon is remarkable

After our helicopter landed inside the Grand Canyon, our pilot who doubled as our guide reminded us a couple times that we had 30 minutes to do what we wanted to do while there. He said, “make sure you take it all in and don’t spend all of your time trying to get the perfect picture or selfie.” I was so thankful he said that. We handed our cameras around and everybody got a few shots with their party, but then we just sort of walked around looking and everything and taking it all in. It really is a place you can live in the moment and want to make sure you do.

6. An amazing view of Lake Mead and the Hoover Dam

To get the the Grand Canyon, your helicopter tour will also take you over Lake Mead and the Hoover Dam. During this part of the ride, you have to wear a fancy blow up life jacket belt in case of an emergency landing!

It’s pretty amazing to see a lake in the middle of this dessert and how colorful the water is.

Going to the Hoover Dam was what started my whole trip idea, so I was very thankful we got to fly over it and see it. It’s stunning how huge it actually is. One day, I will go back and go inside and learn more about the history, how the Hoover Dam was built and how the insides work to create energy. For now, flying over it will have to do…it’s pretty spectacular!

7. You get to ride in an air-conditioned helicopter with a knowledgable pilot

I don’t know what I would have done if the helicopter wasn’t air-conditioned. For the few seconds between closing the doors and the pilot starting the engines, the helicopter can get pretty hot. Not to mention, you get to ride in a helicopter!!

The cool headsets allow you to talk to the pilot and other passengers. The pilot can also communicate with us and told us history of the area, pointed out things we wouldn’t have noticed and told us about things like the solar farms and the cities in the area around Las Vegas. During non-talking times, he played some music over our headsets.

The helicopter tour will save you a ton of time. A trip from Las Vegas to the Grand Canyon by car is more than a day’s worth of driving if you want to spend any time at the Canyon. From pickup to drop off at our hotel (which was included in our cost), it was about 4-4.5 hours. Some of that time was getting to the Henderson (or you could go to the Las Vegas) airport. Some was registering and getting weighed, but most of it was actually in the helicopter taking in the tour.

You know exactly what your helicopter tour of the Grand Canyon will cost. Sure, you can’t win money, but you know what you are spending, and with a view like this, it’s not a loss at all.

To give you an idea of how big this is, see that small speck in the sky in the first cloud line? That’s another helicopter.

We did the Maverick Helicopter Tour Grand Canyon package with a landing. It was touted as the best helicopter tour of the Grand Canyon, and while I don’t have anything to compare it to, I’m thinking that’s a fair assessment.

You can find the tour that suites your needs and takes you all of the places you want to go. You can even fly over the Strip during a Las Vegas Helicopter Tour- Grand Canyon.

In addition, you can also decide on your departure time. We were picked up around 7 am, but there were even earlier options so you could catch the Sunrise over the Grand Canyon. If you are more of a night owl, you could view a sunset on your tour and then fly over the Strip at night with all of the neon lights glowing.

Depending on the weight of your helicopter and cargo, you might get a bonus stop at the “fuel farm.” We were able to see more cactus plants and unique trees at this stop then we saw in the Grand Canyon. I consider it a little perk to the trip.